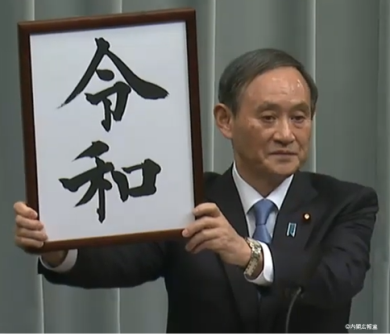 His Majesty the Emperor Akihito, currently reigning, will abdicate this year, and His Imperial Highness the Crown Prince Naruhito will accede to the Imperial Throne. Prior to these events, on April 1st a Government decision was endorsed by a Cabinet order to change the name of the Era and consequently the new Era name, “REIWA”, was announced. This name will become effective from May 1st 2019, when the enthronement of His Imperial Highness the Crown Prince is foreseen.

Regarding the meaning of “REIWA”, the two characters composing the name, “Rei 令”and “Wa和” respectively mean “beautiful” and “harmony”. Furthermore, the name “REIWA” also includes the meaning of culture coming into being and flourishing when people bring their hearts and minds together in a beautiful manner.

Moreover, the new Era name, for the first time in the history of Japan, was taken from a Japanese classic; it is a quotation from “Man'yōshū”, Japan’s oldest poetry anthology, compiled approximately 1,200 years ago.

The year 2019 represents an outsanding turning point for the Japanese people. In addition, September sees the Rugby World Cup taking place in several Japanese cities. Next year, the upcoming Tokyo Olimpic and Paralimpic Games are also expected. We strongly wish that the interest towards Japan will grow further also in Malta, and that, in the meantime, the relations between the two countries in several fields, including the economic relations focusing on the Economic Partnership Agreement which entered into force last February, will continue to streghten further.